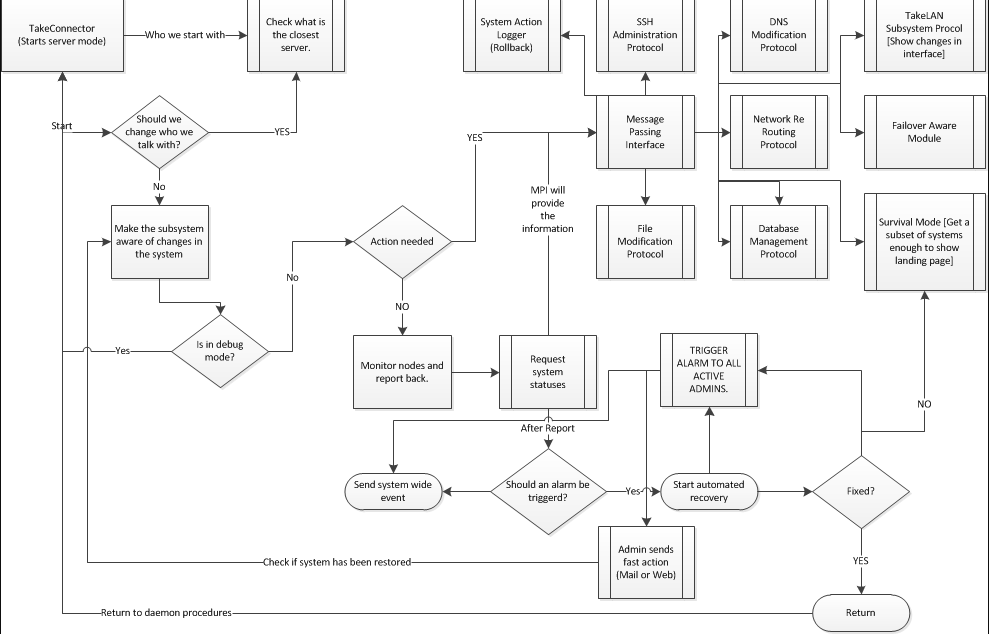 TakeLAN Connector- Administration to the next level

The problem of managing multiple servers that do similar stuff and are used to host in house applications. Avoiding configuration time hogs and automation of server configuration, allowing fast deployments with no scaling limit.

The problem with MultiAll is the fact of having all the servers on sync when they are indifferent “Farms or Grids” and the fact that one server can provide services to more than one purpose. This is why we invent the “Pool system” where all the servers respond or act for a defined pool.

If a server responds to multiple pools the aggregation of every pool is the server.

Understanding how we can make it work:

Under our research, it’s possible to merge more than one server to work for a common goal, making some modifications to the typical database-driven apps to have a cache table. When that server is unable to communicate to others under the same pool, they save the changes they have to make to their brother servers, and later on, when they are back online, deploy the changes.

By this moment we would have a DB Layer abstraction for multiple servers responding to a DB and file system.

Next is the Domain Name Server problem, that we don’t want clients reaching servers that are offline due to maintenance or issues, for this, we’re developing on BIND 9 an abstraction layer that every server in a pool must be “Network-Aware” of others of his kind, and if he’s unable to reach others, then he must change the DNS registry to reflect the changes.

How MultiAll solves the problem:

MultiAll will work as a service provider inside the server, as a global abstraction layer. Once the application is provided with a bridge or connection layer to it, it would be able to take advantage of the system. MultiAll has as key features:

The project has gotten a bit more ambitious… so here is how its changed!

Okay, so some research has been going on, and the project has been growing quite a bit. Among the changes that have been happening around, it has gotten bigger, now all the things stated before, are part of a much larger system.
TakeConnector will now be the daemon that will keep our infrastructure.

Finally got to Texas.